they came from THE UNDERGROUND

Which is a hell of a shame, since last ride we found ourselves in one of the coolest destinations yet - a network of interconnected tunnels and multilevel parking garages (extending deeper than I'd have ever thought) under the downtown core of Vancouver.

This is something that I was vaguely aware existed, but had never really considered. Since the forecast for the night was 'A HELL OF A LOT OF RAIN AND WINDS UP TO 100 KM/HR,' Maitland suggested that we find ourselves somewhere dry to ride - specifically underground. We cruised from grandview towards the downtown core, skimming under BC place to take advantage of the covered section that used to be a part of the indy track. We then looped into downtown and dropped beneath the city's surface through a parking garage entrance next to pacific centre. Down and down we went, playing tag with the security guards before popping out above ground. We headed towards the courthouse and dropped down again, this time passing by where the cops secretly unload dangerous criminals for trial. Tunnels extended from here deeper underground (we did not check this part out - maybe next time?) and also connected back into the pacific centre complex. Back to the security guard. Back above ground after a laugh. How far does this network extend? How much of the guts of the city are avaiable to see for the intrepid explorer? Thats up to you to find out.

From here we cut towards stanley park, but decided to skim by lost lagoon instead of looping the entire park. Probably a good idea - as all of us have no doubt seen the photos of the wreckage that night's storm unleashed on the trees in the area (what I saw in the paper made me feel ill and sad - extreme weather: one more reason to fight fossil fuels). From there it was back to the classic Twenty-Pho hour noodle shop where we gorged ourselves on hot pho before hitting the streets to return home - pushed by delicious 100 km/hr. tailwinds. FASTFASTFAST.

My photos were lost due to borrowed camera kaffufles. THIS WILL NOT HAPPEN AGAIN, as I have procured myself a dandy new digital, which I'll bring to tonights ride. Our favorite photographer Oker also attended this ride, so should some of his photos become available, I'll update here with some evidence of our underground adventures.

Be sure to come out and ride with us tonight - DEC. 29th, 11:45 pm at Grandview Park (commercial drive @ charles st.) Bring your lights, bundle up, and bring something warm to drink! See y'all there.
Posted by simon at 3:22 AM No comments:

This is a special craft event, where beautifully hand-made items like
tool bags, seat covers, arm warmers, and reflective doodads
are all made spectacular, celebrating the art of bikes and bike riders.
Over a dozen artisans assembled for your inspiration.
TELL YOUR MOMS!!!
(Great holiday gifts for those bike-obsessed kids) 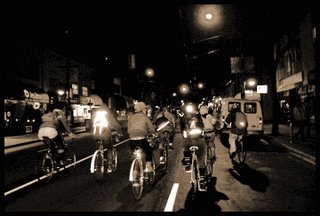 Twelve Months. Three-Hundred and Sixty Five days. Fifty Two weeks. It sure doesn't feel that way. It seems pretty much just the other day that a pack of foolhardy bikelovers gathered in the crappiest month of the year in driving rain to cruise the jet-streaked midnight streets. We came together because we love the night. We came together because we love to ride. We came together to give each other reasons to ride - we created community as a tool to ride out the worst that winter can throw at a cyclist and to celebrate the best that the summer could offer us. And it wasn't long before we were enmeshed in the amazing network of Vancouver Bikelove. I've met a lot of amazing people at these rides, and I know others have too. I've seen friendships grown, networks built, crews formed. And with these folk I've mashed my pedals over every inch of this city in its darkened state.

I thank every one of you that's come out to ride and make the Midnight Mass what it is... because when it boils down to it, the midnight mass is you - yes, it's a name and an idea; more importantly it is the group, a mass of bikers, the wheels on the ground. Every ride is different, has a different feel and flow, a different identity formed by who comes and where we choose to ride. If you are there, Midnight Mass is you. And you fucking rock.

I'd also like to give a shoutout of thanks to Morgan of Project B for stepping up and doccumenting the anniversary ride - you did an ace job my good man!

So, sentimental philosophizing aside, lets get onto the ride.

The meet-up at grandview was a festive affair - complete with vegan cupcakes supplied by Asha. 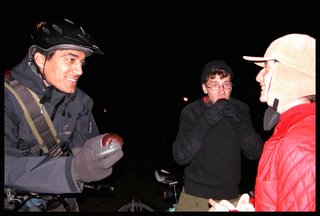 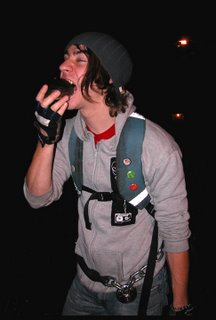 Of course, they baked one giant one and made me eat it. Not that I'm complaining mind you - I'm a bit of a sugarholic as it is.
There were also sexy-as-hell patches with the midnight mass chainring-clock logo for all in attendance.. 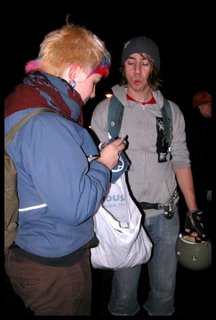 I think we pulled about 30-35 riders - well down from the summer peak of 80 in July, but pretty solid considering the time of year and weather... hell, we were pulling 8-10 most of last winter. 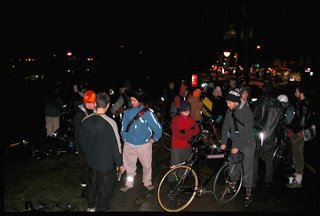 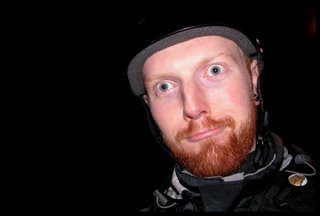 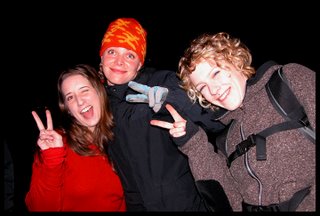 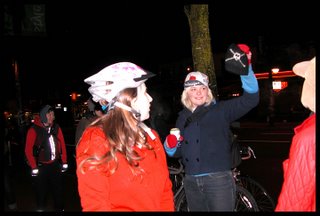 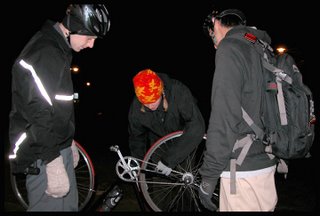 It wasn't long before we hit the road, owning the streets only the way you can in the middle of the night.. 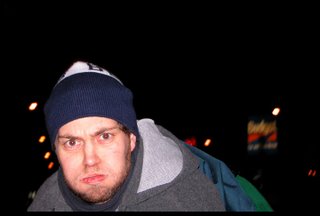 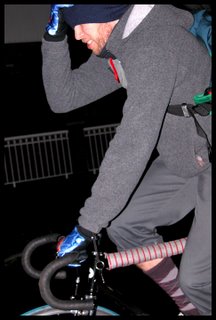 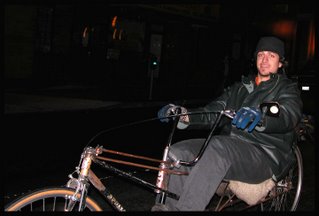 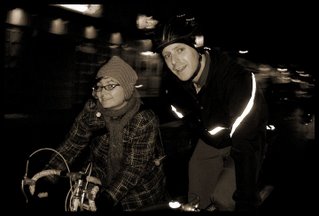 Our destination was the Mountainview Cemetary at 33rd and Fraser... the first place that the Midnight Mass ever rode to oh those many months ago. Here's a couple of photos from that first ride, and what I wrote the next day: 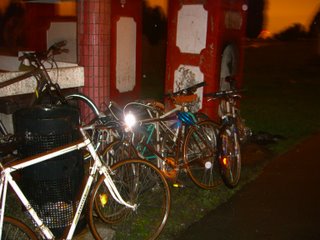 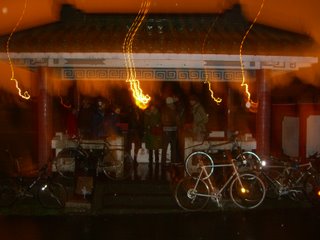 Well, it rained like a motherfucker last night, but despite that, we got 10 people together and rode it out anyway with stops for hot mulled wine, hot chocolate, and doobies in the cemetary. Despite getting a bit damper than I'd have liked, I had a kickass time. Best part of the night was finishing the ride at 24 hour Pho, where hot noodle soup and tea were exactly the healing balm needed to warm our soggy souls.

Plan is to try and do this again in two weeks - so the next Midnight bike ride (Midnight Mass, as has been suggested) will be thursday Dec. 8. Meeting at 11:45 @ Grandview park. Hope to see some of you there!"

This year, we had less rain and more riders - here we are chillin' a year later in the same part of the cemetary.. 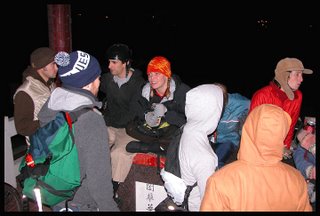 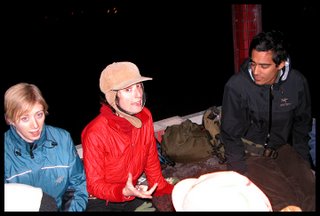 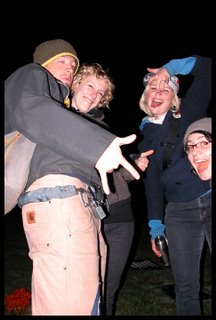 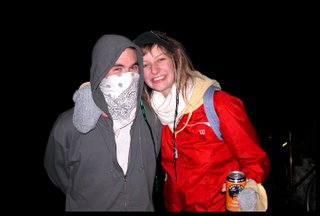 Hot Scotch - the traditional libation of the midnight mass, amongst other refreshements were consumed before we hit the road again.

Someone called "bikeswap!" and before thre was a scramble to grab someone elses bike and get on it - freewheelers ended up on fixies and vice versa, short people struggling on tall folks' wheels, and all sorts of confusion. We rolled west on 37th ave. to Oak St. where we swapped back to our own bikes to bomb the hill down to 33rd. The next stop was the Crescent (AKA the GhettoDrome), another MM favorite spot, and destination of MM's second ever ride, last december. Here we chilled again, and a second batch of cupcakes was consumed (non vegan this time) while a few people raced and sprinted around the 'drome. Amazingly, despite the fact that the ghettodrome is in the heart of Old Money vancouver, and is surrounded by mansions, we've never been hassled here - by residents OR the police. I don't know if its because we've never been rowdy enough (this would be surprising), or that the properties surrounding the 'drome are so large and the houses set so far back that they don't even know we're out there. Either way, I love that spot and would like to see us set up a midnight race there or something. Midnight Dash for Cash in the Ghettodrome?

We peeled out after a good while, heading (accidentally) west, though soon realizing our mistake and rolling back east to the old old favorite 2 am feed spot, the 24 hour pho noodle house at Cambie and Broadway. Pho and hot green tea were consumed and we toasted an amazing year.

Thanks again to all who came out - I'll see you next week THURSDAY DEC 14th, for the next Midnight Mass!